Benedictine College has been great, especially with meeting new people, being active in my Catholic faith, and having the opportunity to contribute to a print newspaper: the Benedictine Circuit. As is my fancy, I’ve also had those times to be able to exercise my photo/video practices.

One semester is over, and Christmas break has come! Here are a few still shots I would like to share, most of which were taken on campus. 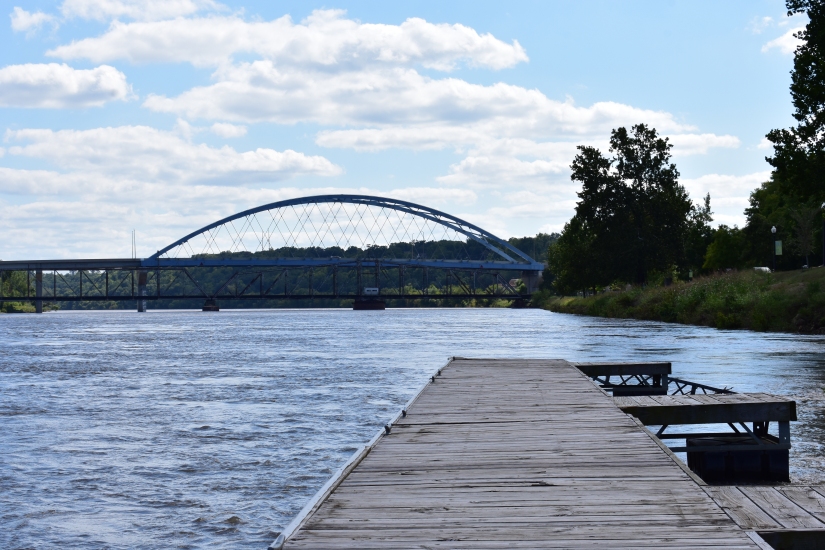 During warmer weather, I was able to do a fair amount of walking in the afternoons. So I found myself meandering down to the local pier of the Missouri River which runs through Atchison, KS. From such a lookout point, I had a spectacular view of the sky, rows of verdant trees, and the Amelia Earhart Memorial Bridge. (By the way, Amelia Earhart was born in Atchison!)

This same bridge is visible from certain lookout points on campus – if you’re high enough up. It was also distinguishable early Tuesday morning when Mom and I set out for home, a highway journey which would take about seven and a half hours. Before we left the hotel, I snapped this dazzling photo of the frost on the vehicle softened in the foreground and the silhouetted bridge on the horizon:

I know it’s not picture perfect with all cars in the adjacent parking spaces. But I still like the aesthetic of the lighting, the soft colors in the brightening sky, and the glittery effect of the minute ice crystals on top of our car.

Here is another photo I took (with my DSLR). There is nothing too extraordinary behind the taking of this photo. However, it was one of the dozens I took for the college-run newspaper story I was covering on the annual bed races. This just so happened to be the one our editor chose to accompany the print story:

And here are a few others from my work that day in between interviewing fellow students:

The above photograph pictures the soccer field covered in a light dusting of snow. At its center is an enormous “B” for Benedictine and within it a cross. And lastly, I have this interesting piece to submit to your attention:

The moon is obviously a prominent element. (The moon has long been a subject of interest for me and my DSLR’s.) Here I was attempting to maximize the presence of the moon in the frame while also displaying spiked icicles softened in the foreground with the moon situated between or amongst them.

However, I would have preferred the icicles to be a bit more easily distinguishable. Hope you enjoyed a few snapshots into my daily atmosphere for the past few months! Have a good one!

A Catholic dude who loves faith, family, and friends. Writer for Hacker Noon, ZME Science, Prehistoric Times Magazine, and Voyage Comics' Excelsior Blog. He has also written for Culture Wars Magazine, Grotto Network, We Got This Covered, Tea with Tolkien, and Midwest Film Journal. View all posts by John Tuttle

1 thought on “Photos from My Early Benedictine College Experience”