On November 8, 2018, while snow was falling through the cold night air, Mario Escobar gave a reading of some of his poetic works intermingled with some backstory on what drove him to write. He delivered his lecture in the Ferrell Academic Center at Benedictine College.

Dr. Francisco Leon Rivero, Assistant Professor of the World & Classical Languages and Cultures department, is a good friend of Escobar’s. At 7:08, he started off the event by introducing the poet. Professor’s Escobar’s story is one of hardship, an endeavor to mend relationships, and a struggle with coping with PTSD.

Mario Escobar’s story in relevance to his lecture began at the age of 10 when he became a child soldier involved in the guerilla warfare raging in El Salvador where he was raised. The professor cannot recollect some of the details of his time spent in combat. He also stated that when he gets in certain proximity to a helicopter, his body trembles. The professionals he has consulted say it is part of the PTSD that is not likely to leave him in the near future.

Moving from his war-torn homeland to the streets of L.A. at age 12, Escobar was reunited with his mother. He describes the relationship with his mother as a delicate situation. After the war, he felt as though she was often distant. Teaching himself English through his passion for digesting literature, he still struggled with flashbacks to the war for a long time. As he read excerpts from some of his poetry, it was clear he had a deep attachment for what he was expressing through this creative medium.

“History is never a closed or finished project,” the poet said. His own history shall always be a part of him. But the self-expression he has found in poetry functions as a great tool for exploring his past.

The poet/professor is grateful to his therapist but also to the medium of the written word. In many of the stages of his life, Escobar has turned to literature as an aid in soothing, even healing some of his troubles. The reading and enjoyment of literature provided him with a form of escapism from his problems. (This is what effective creative literature is meant to do.)

He has expressed delight especially in works by such writers as William Blake and Robert Frost, but he attests his favorite novel to be Don Quixote by Miguel de Cervantes. Soon, however, Escobar turned to producing literary works of his own. This practice helped him in rediscovering fragments of his past.

Several of his own poems, such as “A War Call” and “I Have a Poem,” employ the literary devices of anaphora and epistrophe, that is the repetition of a phrase at the beginning of clauses and the repetition of a phrase at the end of clauses, respectively. This aspect gives those of Escobar’s poems a likeness to Edgar Allan Poe’s “The Raven” which also uses the epistrophe device.

The author has a single prose novel published: Paciente 1980 which Francisco Leon Rivero urged him to publish and to which he contributed a foreword. However, Escobar confesses to a personal distaste in writing prose. He enjoys reading prose, but as far as writing goes, his heart lies in poetic verse.

“When I talk about the field of the perceptible,” Escobar says, “I think poetry in that sense can be weaponized as a war machine…It brings us closer to our shared humanity.” He went to state he takes refuge in his poetry, another means of escapism. Ultimately, Escobar sees poetry as a medium for healing, growing, and promoting political viewpoints.

The proud father of five, he is the founder of the Izote Press, the inaugural Central American publisher based in the U.S. Some of his poetry, including pieces included in the lecture, can be read in Beltway Poetry Quarterly at washingtonart.com. 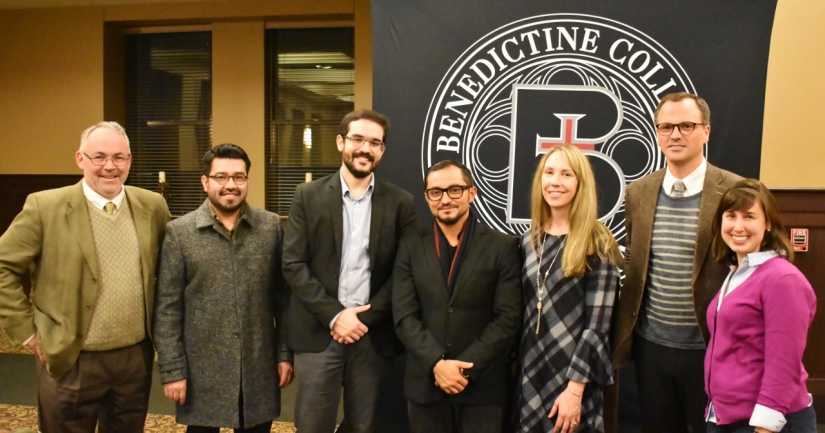 A Catholic dude who loves faith, family, and friends. Writer for Hacker Noon, ZME Science, Prehistoric Times Magazine, and Voyage Comics' Excelsior Blog. He has also written for Culture Wars Magazine, Grotto Network, We Got This Covered, Tea with Tolkien, and Midwest Film Journal. View all posts by John Tuttle